Through its publications, African Rights campaigns for urgent action to tackle current problems, but also aims to contribute to debates about how to promote peace and respect for human rights in the long term. Detailed studies, combining primary source material and in-depth analysis, give our publications lasting relevance.

Click here to download a listing of all books, reports, articles and publications including an order form (320K Acrobat PDF.)

Reserved for the most substantial work likely to be of enduring importance, either from an analytical or historical perspective.

African Rights produced the earliest detailed account of the 1994 genocide of Tutsis and the murder of Hutu opponents in Rwanda: Death, Despair and Defiance (Revised Edition), August 1995. This immediately became a standard reference text. It reproduces verbatim the testimonies of hundreds of survivors and analyses the motives and activities of the extremists, naming leading genocide suspects.

Survivors of the Rwanda genocide.

Acts of individual heroism in the face of genocide are the subject of Rwanda: Tribute to Courage, a collection of remembrances from survivors and witnesses of the genocide, told publicly for the first time. The book names men and women from all walks of life who risked their lives to save others and tells the compelling stories of their achievements. Many of them were killed with the people they sought to defend. They are moving accounts of fear and gratitude, of human triumphs in the face of catastrophe. 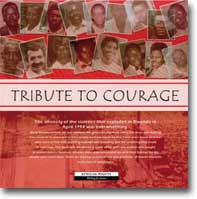 Tackling urgent issues with a campaigning approach. They are usually tightly focused on a particular subject and call for specific responses.

African Rights’ inaugural report Operation Restore Hope: A Preliminary Assessment, May 1993 revealed the inadequacies of the military intervention in Somalia in 1992. It challenged preconceptions, demonstrating that military intervention can create at least as many humanitarian and political problems as it solves. The report made a number of recommendations with the imminent arrival of the United Nations Operation for Somalia (UNOSOM II) in mind, including regarding its mandate. The validity of these was borne out by subsequent events.

Where conflict governs the day-to-day life of civilians, the administration of justice is often the first casualty. The collapse of the justice system in northern Uganda and the unique approach of the residents of northern Uganda to this predicament was the subject of Northern Uganda: Justice In Conflict, January 2000. The report put forward a set of practical proposals towards the restoration and development of justice initiatives, while emphasising their potential to contribute to conflict resolution in the region.

Discussion Papers explore issues that we see as important for the future, sometimes as a prelude to substantive research or advocacy.

African Right’s Discussion Papers are intended to stimulate debate among Africans, NGO workers, and others who share similar concerns to our own.

In Zimbabwe: In the Party’s Interest, June 1999, African Rights examined the growing constraints upon opposition political parties, civic organizations and the media and noted the rising popular discontent with the Zanu (PF) government.

It expressed concern about the enduring social injustice experienced by black rural communities, the failure of land redistribution policies and the political manipulation of this issue by the government at the expense of much needed reforms. At a time when few voices were raised on an international level, African Rights warned of the impending crisis in Zimbabwe.

These expose the identities of individuals responsible for mass murder in Rwanda, selecting cases which have been neglected or particularly difficult to prosecute.

The allegations of genocide against two Rwandese nuns, Sister Gertrude Mukangango and Sister Julienne Kizito in Sovu, Butare, were detailed in Issue 11. This report provided the most comprehensive account of these events at the time and gained wide media coverage.

In April 2001 both nuns were tried in a Belgian court. They were convicted of violating humanitarian law and sentenced to 15 years and 12 years respectively.

These summarise allegations against individuals accused, by survivors, witnesses and perpetrators, of involvement in the 1994 genocide in Rwanda.

They make public information gathered by African Rights either calling for investigations, or seeking to support them. In each case, African Rights makes direct contact with the relevant authorities to encourage them to act and several of those named are now in custody.

This can be particularly important when a genocide suspect has found a welcome and a measure of support in exile, as did Father Athanase Seromba, the subject of Charge Sheet No 2 of November 1999. Father Seromba’s priestly status helped to shield him from justice while he lived and worked in Italy. African Rights published the results of its investigation into his case in November 1999. Father Seromba was arrested and placed in custody at the International Criminal Tribunal for Rwanda (ICTR) in Arusha on 6 February 2002.

African Rights is seeking to contribute to the impact and authority of the work of the Gacaca courts by producing research into the history of the genocide in the twelve original pilot sectors.

These accounts are part of a wider programme monitoring this unique justice mechanism established to try the majority of those accused of involvement in the 1994 genocide in Rwanda. The history reports provide useful background information and a written record against which to measure the work of the trials.